Bringing Seafood to Your Plate - The Organic Way

By Mandy Calkins
People have been raising marine animals for food for hundreds of years — a process called aquaculture. But as the demand for seafood has grown, some sea farmers have pioneered organic techniques to reduce the impact of aquaculture on the marine environment. 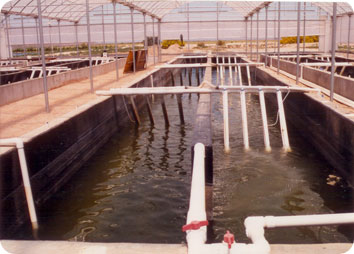 Young shrimp are kept in these specially controlled √¨raceways√Æ where they acclimate to the surrounding environment. Once stabilized, the shrimp are transferred to special growing ponds. Image courtesy of Desert Shrimp Farm, Arizona.

One form of aquaculture, shrimp farming, has become notorious for its environmental consequences. Coastal shrimp farms in developing countries have been blamed for destruction of wetlands. Overcrowded shrimp ponds are susceptible to disease, and the antibiotics or pesticides farmers apply to them can pollute surrounding habitats.

Organic shrimp farmers use special techniques to clean up the process. One method is the closed system where farms are self-reliant without having to depend on the ocean. These farms produce their own shrimp food and dispose of wastes within their own facilities. A farm in Florida grows plants and feeds them to tilapia, a species of fish used to make shrimp feed. Waste from the shrimp fertilizes the plants, which starts the process all over again.

A West Texas farm uses underground saltwater to grow organic shrimp far away from the ocean. Keeping ponds free from overcrowding reduces the outbreaks of disease, so the farmers don’t have to use pesticides or antibiotics. Also, the shrimp are fed flax and soybeans produced by organic farmers.

Several countries in Europe, Latin American, and Asia are currently producing organic seafood, and the United States is finalizing standards for organic aquaculture. Organic shrimp farmers are hoping that consumers will be motivated to buy organic - especially when they realize what a difference it makes to the environment.