On some late spring nights, the beaches of southern California come alive with the silver tide — hundreds of small, shiny fish. 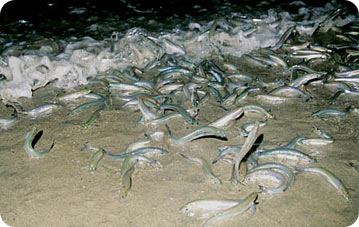 During the heaviest grunion runs in April, May and June, thousands of fish may come ashore to spawn. Credit: Mike Brock Photography.

These silvery fish are California grunion. They’re about 5-7 inches long and found only along the coast of southern California and northern Baja, Mexico. The name grunion comes from the Spanish word for grunter because of the squeaking noise the fish make during spawning.

The grunion’s mass spawnings, called runs, take place from April through June. Runs occur during the highest tides of the month, a few nights after the full or new moon. On these nights, grunion wait until the high tide has just begun to recede before swarming out of the water and onto the beach. Females wriggle tail-first into the sand, where they lay eggs about two to three inches below the surface of the beach. Male grunion curl around the females and release milt, which fertilizes the eggs.

The buried eggs get plenty of oxygen and warm temperatures in which to incubate. The embryos develop for about 10 days — until the next full or new moon. Then, the next series of high tides washes onto the eggs, triggering them to hatch, and they are washed out to sea.

How do grunion know when it’s the right time to spawn? Scientists think the fish might have an internal clock that is set off by environmental cues, such as slight changes in water pressure that come with the rising tide. Whatever the mechanism, California grunion have developed a unique way to use the tide to their advantage.