For many people, anchovies are simply the pizza topping they love to hate. But the humble anchovy - along with another silvery little schooling fish, the sardine - triggered scientists to look closer at a Pacific Ocean phenomenon. 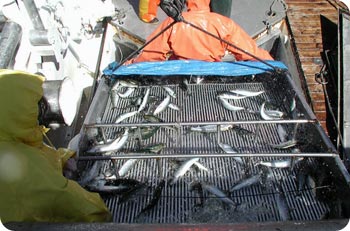 Fishermen catch and sort Pacific sardines while at sea. Credit: Washington Dept. of Fish and Wildlife.

Researchers have found that Pacific anchovy and sardine populations seem to take turns ruling the waters at intervals of about 25 years. When Pacific temperatures are slightly higher than normal, sardines thrive; when temperatures cool down, sardine numbers decline and anchovy populations flourish.

Fisheries are at the mercy of these fluctuations. Swelling sardine populations in the 1930s and 1940s created a lucrative fishing industry in California, but the business went bust in the 1950s when the Pacific Ocean - and the sardine population - cooled down. But fishermen in Peru saw great success during the anchovy boom that followed.

The fish seem to respond to a 50-year cycle of cooling and warming that occurs naturally all across the Pacific, from Alaska to Chile. This phenomenon is termed the Pacific Decadal Oscillation. Sea surface temperatures change by a few degrees, altering ocean conditions and the abundance of many types of marine life - including the tiny organisms that sardines and anchovies feed on.

Understanding the anchovy-sardine shift isn’t just helpful for fisheries. Knowing when to expect changes in fish populations can also help scientists study other issues, such as overfishing and climate change. A major deviation from the predictable anchovy-sardine pattern could tip off scientists that something in the fish’s environment needs investigating.