Think of nature’s great migrations and you might imagine birds flying over continents or antelope crossing the African plains. But European eels make a journey that is even more incredible. 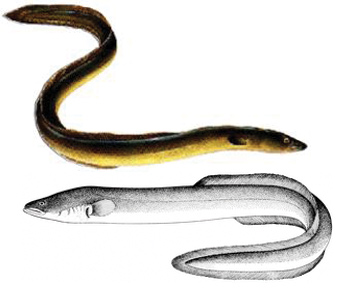 A yellow and silver European eel. Credit: Fisheries and Aquaculture Department, Food and Agriculture Organization of the United Nations.

European eels are catadromous fish, which means they are born in the ocean and live as adults in fresh or brackish water. They hatch in the Sargasso Sea, a warm-water area of the North Atlantic Ocean, and begin their life cycle as flat, ribbon-like larvae called leptocephali. The Gulf Stream and North Atlantic Drift currents carry these larvae from their birthplace to coasts from Iceland to Europe and North Afryica.

After about one year, leptocephali reach coastal waters and metamorphose into transparent “glass” eels. These juvenile eels swim into estuaries, and many swim further into fresh water, where they take on a yellowish-brown coloration. “Yellow eels” live up to 20 years in rivers and estuaries.

When the time comes for adult eels to travel back across the Atlantic Ocean to the Sargasso Sea to spawn, they undergo a final transformation to prepare for the trip. Their bodies become silvery. Their eyes grow larger and more sensitive, which helps them see in deep ocean waters. They build up fat reserves, and their digestive tracts degenerate, making it impossible for them to feed during their long swim.

These silver eels journey several months and some 3,000 miles to take part in a mass spawning event, and then they die. Scientists aren’t sure precisely where silver eels gather to spawn. But every year, tiny eel larvae appear in the Sargasso Sea, ready to start their life cycle — and the amazing migration — all over again.