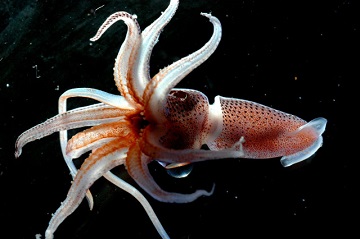 Living in near-total darkness requires some creative adaptations both to find food and avoid becoming food. For the red-colored strawberry squid, also called the cock-eyed squid, that creativity involves hundreds of tiny “strawberry seed” dots covering its body and a bizarrely mismatched pair of eyes. The “seeds” are actually tiny organs called photophores that emit light, or bioluminescence. The football-sized squid can use a camouflaging strategy of counter-illumination to avoid being seen from below. For predators looking upward, the dim light from the photophores matches what little sunlight filters down from above, so the squid blends in instead of appearing as an easily targeted silhouette.

But counter-illumination is a common tactic in the deep sea. It’s the squid’s eyes that really stand out — at least one of them. Imagine looking for faintly glowing creatures in pitch blackness while also trying to see illuminated creatures against a dim background.

The eye can’t process both simultaneously. So this squid evolved a separate eye for each job. One small dark eye always looks downward, seeking out flashes of bioluminescence produced by possible prey, such as small fish, shrimp or other squid.

The other massive, bulging, yellowish eye always looks upward. It appears yellow because it absorbs blue light. Filtering out blue light makes other colors more noticeable. So prey that use counterillumination above stand out more to the squid’s bulging eye if their bioluminescent color doesn’t perfectly match the blue light from the sun. The eye’s extra large size also takes in more light. But, to focus, such a big lens needs to be further from the retina, so the eye bulges out in a tubular shape.

For a hungry squid that wants to survive, it’s the best of both worlds: cloaking itself with its bioluminescence while keeping one eye out for flashes below and one eye out for camouflage above.