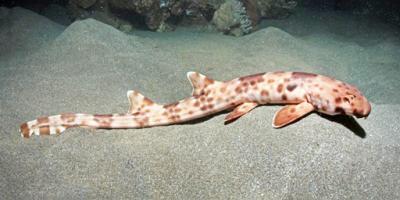 When most people hear “shark,” they picture a large, sleek-bodied predator slicing through the open water, perhaps with the triangle of its dorsal fin poking through the surface as a warning. But there are more than 1,000 species of sharks of all shapes and sizes—including some small sharks that are adapted to living in very shallow water.

Epaulette sharks, also known as “walking sharks,” are cousins of the larger and more familiar nurse sharks. Walking sharks have heavy, muscular fins that they use to push themselves across rocks and coral. These elaborately patterned sharks are also able to withstand very low oxygen levels. Together, these special adaptations allow them to seek out a dinner of mollusks and small crustaceans in very shallow water, such as tide pools. Life in tide pools can be difficult for large, active animals because, having the connection to the sea cut off until the next high tide, oxygen levels in tide pools can become very low.

Walking sharks are small, usually growing to just over two feet long, though sometimes reaching three and a half feet, and they spend their nights hunting in shallow reefs and seagrass beds, picking off their prey from rock crevices and in the sand. Humans wading in a shallow tide pool need not fear walking sharks, though, these sharks are only interested in shellfish for their meals.