Speaking of the Seals...

SATS-200-speaking of the seals- website.jpg 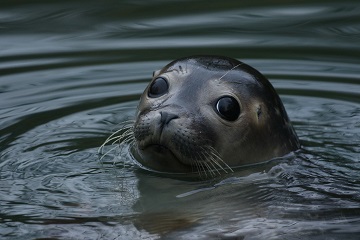 Baby harbor seals can change the pitch of their voices, which is rare among mammals. Credit: zoofanatic, CC BY 2.0

More than four decades ago, a seal named Hoover began captivating visitors at Boston’s New England Aquarium. It wasn’t his slick swimming or friendly face drawing visitors to his tank. It was that Hoover, a harbor seal rescued by Maine fishermen as a pup, seemed to call out in a gruff voice, “Come over here!” The first time Hoover seemingly spoke in his deep, Maine-accented voice in 1978, museum workers wondered if it was a fluke. But with the encouragement of fish treats, Hoover soon showed off his repertoire, barking out “hello there, how are you” or “get out of here” or even producing a sound uncannily similar to human laughter.

Long after Hoover died in 1985, scientists puzzled over how he could mimic human speech. Now, a study of eight harbor seal pups has revealed another piece of that puzzle. Before releasing the pups at 1-3 weeks old from a Dutch rehabilitation center, researchers played sounds from the sea at different volumes for the pups and recorded how the pups responded. As the volume of the sounds increased, the pitch of the pups’ voice dropped. One seal did what humans do in loud environments, raising its voice as the recorded sounds grew louder.

While various other animals have shown the ability to raise their voice when they hear louder noise, the ability to change their pitch is rare among mammals, usually found primarily in humans, bats…and apparently young seals. The study’s results hint at the possibility that seals could have connections between the brain and larynx that have so far only been found in humans. If so, studying seals may unlock secrets to how human speech develops.