If the weather in your part of the country was wetter than normal last winter, blame it on El Niño. If it was drier than normal -- or colder, or warmer, or windier -- well, blame El Niño. 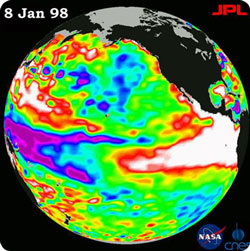 Over the last couple of decades, we seem to blame El Niño for just about any abnormal weather. Some of the blame is deserved, but not all.

El Niño is the name for a change in the winds and ocean currents along the equator in the Pacific Ocean.

In the late 1800s, fishermen off the coast of Peru noticed that the water sometimes became much warmer than normal. It usually happened around Christmas, so they called the phenomenon “El Niño” for the baby Jesus. Later, scientists realized that El Niño affects not just Peru, but much of the Pacific and beyond.

Winds in the tropical Pacific blow from east to west. That piles up warm water in the western Pacific, and allows colder water to rise near the surface in the eastern Pacific, near the Americas.

But every few years, the prevailing winds weaken, and some of the warmer water flows into the eastern Pacific, creating an El Niño. Australia and Indonesia experience droughts. Peru takes smaller hauls from its fisheries. The United States sees wetter weather across the south, and drier and warmer weather across much of the north. El Niño can also block Atlantic hurricanes, as it did last year.

The latest El Niño peaked last winter. Now, the opposite of an El Niño is taking hold -- La Niña -- giving us something different to blame for unusual weather.