When a fish known as Torpedo californica locates its prey, it glides in slowly. When it’s within a few inches, it lunges, enfolds the prey like a tortilla wrapping around a piece of skirt steak, then stuns it with an electric shock of up to 50 volts. 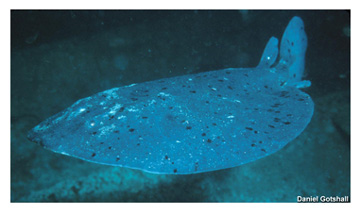 Torpedo californica may sound like a creature from a sci-fi thriller, but it’s really a type of ray -- the Pacific electric ray -- that’s found from Baja to British Columbia. It’s among dozens of fish that use electricity to find their way through the water, locate and stun their prey, and fight off danger.

The most famous is the electric eel -- a freshwater fish in South America. Its shock is strong enough to stun a grown man.

But other electric fish live in the oceans and seas, including more than a dozen species of rays and the family of fish called stargazers. Stargazers hide on the bottom until their prey comes close. Then with a jolt of electricity from near their eyes, they stun their prey and gobble them up.

Electric fish generate their charges through bundles of muscle fibers that produce chemical reactions, like the cells in a car battery. The fibers can discharge up to several hundred times a second.