A tongue-in-cheek study a few years ago found that Kansas is flatter than a pancake. For their next work, the geographers who compared the two might want to study the ocean floor. Great stretches of it, called abyssal plains, are the flattest places on Earth. 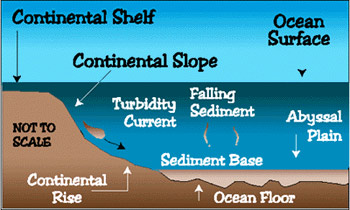 These plains may cover almost a third of Earth’s surface -- about as much as all the exposed land combined. They’re found between the edges of the continents and great underwater mountain ranges.

At depths of thousands of feet, there’s absolutely no light. The water is near freezing, and the pressure is hundreds of times greater than at the surface. Even so, many species have adapted to the harsh conditions. They eat a “snow” of dead organic matter that falls from the upper layers of the ocean. Because of the cold, they have slow metabolisms, so they don’t need to eat very often -- generally, only once every few months.

Just how flat are these plains? In most cases, their slopes are less than one foot in a thousand. Or to put it another way -- flatter than a pancake.