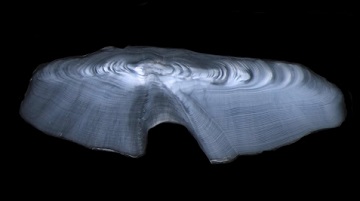 Southern flounder that live along the Texas coast move around a bit – they’re “marine migrants” that relocate to find the best living conditions – defying the expectations of marine biologists.

Flounder spawn offshore, and the juveniles then move into the bays and estuaries behind the barrier islands. The standard view says the young then spend some time in fresh or low-salinity water – in or around the mouths of rivers, for example. After that, they move into saltier waters, where they spend the rest of their lives.

But researchers at the University of Texas Marine Science Institute found that that’s not always the case. They looked at the chemical composition of the otoliths of about 250 fish. An otolith is a small stone-like structure in a fish’s head that’s used for balance and hearing. It adds a new layer every year with minerals taken from the water, so it’s like a flight data recorder – it constantly records information about the fish’s environment. In this case, the otoliths revealed that more than half of the fish had spent their entire lives in saltier waters.

The researchers say the difference could just be a matter of timing – whether a group of juvenile flounder swim into the estuaries during a rainy season or a drought season. On the other hand, perhaps the flounder have a wider range of behaviors than previously thought. They may move around to find better temperatures, clearer water, and more food – migrating to find the best living conditions along the Texas coast.

This episode was made possible by Texas Sea Grant.