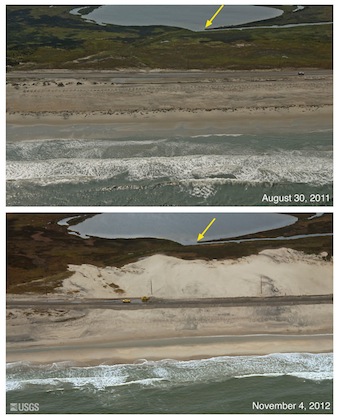 Before and After images from Hurricane Sandy taken in North Carolina. Credit: USGS.

The 2013 Atlantic hurricane season was puny. The total number of named storms was about average, at 13. But there were only two hurricanes, which was the lowest number since 1982, and for the first time since 1994, there were no hurricanes of category 2 or stronger.

According to a recent report, though, that was just a blip in an overall trend produced by global climate change. Over the last three decades, the number and intensity of the strongest Atlantic hurricanes has been going up, and that trend is expected to continue.

The National Climate Assessment was assembled by a team of 240 scientists and engineers from academia, government, and other areas.

The researchers did more than just count up the number of strong hurricanes. They also looked at changes in water and air temperatures, ocean circulation patterns, the amount of dust and other particles in the air, and many other factors. They then used several climate models to project what might happen in the future.

Most of those models predict a sharp rise in the number of “major” hurricanes – those with winds stronger than 110 miles per hour. The models predict a smaller number of weaker storms, though. And they show no jump in the storms in the North Pacific and other ocean basins.

But the assessment notes that the link between hurricanes and warmer ocean temperatures is complex and an area of active research – research that may tell us more about what we can expect to come roaring out of the oceans in the decades ahead.