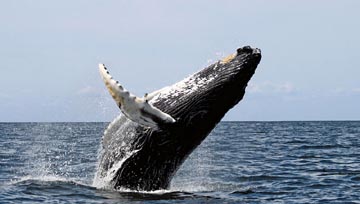 To those who appreciate their beauty, great whales are priceless. For those who prefer cold hard facts, a recent study estimated their value: about two million dollars apiece. That comes from their benefits to the environment.

Great whales are the giants of the whale family -- a total of 13 species, including blue, humpback, sperm, and bowhead. They’re found in all the world’s oceans.

The whales accumulate carbon from the food they eat. Carbon dioxide is taken from the air by tiny organisms known as phytoplankton. The whales eat the phytoplankton, or they eat larger organisms that feed on phytoplankton. Over a whale’s average lifetime, that adds up to about 33 tons of carbon removed from the air. When a whale dies, it sinks to the bottom of the ocean, locking the carbon away.

And whale poop contains iron, nitrogen, and other nutrients that help the phytoplankton grow. So more whales means more phytoplankton, which capture about 40 billion tons of carbon per year and generate about half of the oxygen that’s pumped into the air.

The International Monetary Fund studied the value of the contribution that great whales make to the environment. The study found that the current population is worth a trillion dollars or more.

And the number of whales probably is a quarter of what it was before people started slaughtering them. A return to earlier population levels could greatly increase the amount of carbon taken out of the atmosphere -- a priceless benefit of a priceless resource.