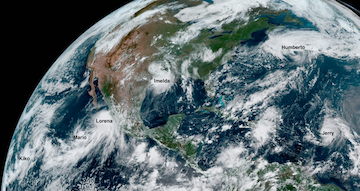 After major hurricanes, scientists fear a bout of extreme heat could pose a major health risk for millions. Photo Credit:NOAA

Earth's changing climate is expected to produce higher temperatures and stronger tropical storms. And when you put those two together, the results could be especially deadly.

A team of scientists recently studied the risks of extreme heat -- defined as a heat index of 105 degrees Fahrenheit or higher -- after the landfall of a hurricane or typhoon. The team found that such a one-two punch could pose major health risks for millions of people.

The problem is that big tropical storms knock out power for large areas -- outages that can last for weeks. That deprives people of air conditioning. That's a particular problem for city-dwellers, who might not have a natural airflow to keep them cool. So the victims of tropical storms might then have to face long periods of high heat -- with potentially fatal consequences.

The researchers found that such double-whammies haven't happened often so far -- only a few times in northwestern Australia, where the population is small. That's mainly because temperatures usually max out a few weeks before the peak in tropical storms, so the major heat has abated by the time most storms crash ashore.

But using computer models, the researchers found that the rate of such a deadly coincidence should go up in a hurry as temperatures rise -- from about once per decade now, to once a year with warming of about six degrees over current levels. That could put millions of people at risk -- the risk of a double catastrophe caused by our warming climate.