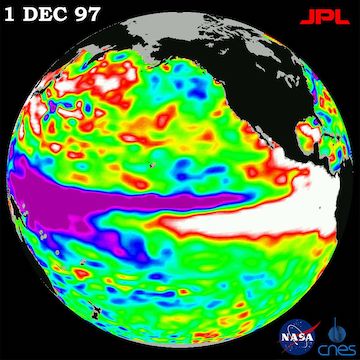 Japanese scientists have identified the El Niño Modoki, which is a different variation of El Niño. Photo Credit: NASA

Climate scientists in Asia noticed something odd about the summer of 2004. Droughts and heat waves overwhelmed a good bit of southeast Asia, most of Australia, and parts of the Americas. But it was especially wet in the Philippines, New Zealand, and Brazil. At the same time, scientists recorded unusual water temperatures in the Pacific Ocean.

The scientists attributed the odd climate to El Niño -- but not the one that brings floods to the southern half of the United States. Instead, they identified it as a variation of El Niño. A Japanese scientist called it El Niño Modoki -- a Japanese word that means “a similar but different thing.”

A conventional El Niño starts with unusually warm waters in the eastern Pacific, all the way to the coast of South America. It triggers changes in climate for the United States and many other parts of the world.

El Niño Modoki starts with a pool of warm water in the central Pacific, flanked by cool water to the east and west. This version of El Niño affects the climate, too, but in different ways. Instead of rain, for example, the western United States gets drought. But Modoki generally is weaker than a normal El Niño, so its effects can be muted by other climate events.

Since the 1970s, El Niño Modoki has become much more common. It’s about as frequent today as normal El Niños. That could be a result of human-caused climate change, or a peak in a natural climate cycle. Either way, El Niño Modoki could become more frequent in the decades ahead.