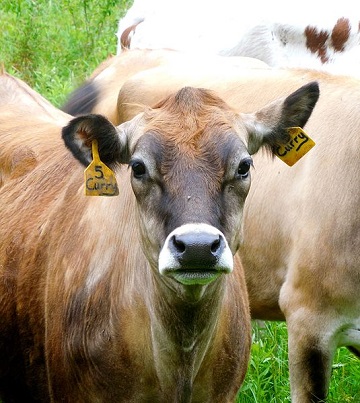 When sheep or cattle burp, it’s not just rude -- it’s a hazard. The average dairy cow can belch almost 400 pounds of methane per year. And methane is a powerful greenhouse gas -- 28 times more effective at trapping heat than carbon dioxide is. So sheep and cattle account for up to 20 percent of global climate change.

One way to cut that amount may be to feed them seaweed. A small amount mixed into the diet can almost completely eliminate the methane the animals produce.

The discovery was made a few years ago by a dairy farmer in Canada. He found that cows grazing at the seashore gained weight faster than those away from it. The only difference was seaweed. When he fed it to his other cows, they grew faster, too. And when scientists studied the effect, they found that the animals produced less methane.

Teams in Australia and the United States have been studying the process ever since. They’ve zeroed in on a type of red seaweed called Asparagopsis. It contains a compound that cuts the production of methane in the animals’ digestive systems. A study in 2020, for example, found that a two percent concentration of the seaweed in the diet of beef cattle cut methane to almost nothing. And because they weren’t losing the energy that was converted to methane, the cattle gained more weight.

Growing enough seaweed to feed the world’s animals will take large-scale offshore farming. But the effort could make a big difference in greenhouse gases -- one “burp” at a time.