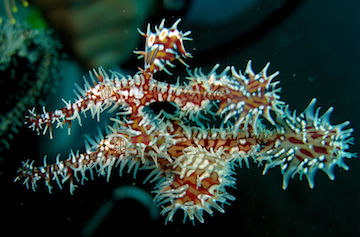 The ghost pipefish is a master of camouflage. One species looks like blades of seagrass, while another looks like fronds of kelp. And one species piles on several disguises. In fact, the ability to blend in -- to appear and disappear -- earned the ghost pipefish the “ghost” part of the name.

The ghost pipefish is found in warm, shallow waters from the eastern coast of Africa, across the Indian Ocean, to Australia and Southeast Asia. It inhabits everything from coral reefs to seagrass beds. It grows up to a few inches long, with females larger than males.

The ghost pipefish isn’t a true pipefish, although the two are related. Another cousin is the seahorse, which the ghost pipefish resembles. It has a longer snout, though, which is used to vacuum up tiny shrimp and other tasty morsels. Another difference is that while the male seahorse incubates the eggs, the female ghost pipefish does the job. She folds together a couple of fins to make a secure pouch.

The ghost pipefish floats near the sea floor -- usually head down, which helps disguise it from predators that are swimming above it. The ornate species is especially good at disguises. Small appendages that look like spikes grow from its body and fins. That makes the long, slender critter look like a thorny stick. And it can change the mottled colors on its body to blend into the background. That scheme is so effective that divers have a hard time finding it. So actually seeing one is a rare treat on the ocean floor.