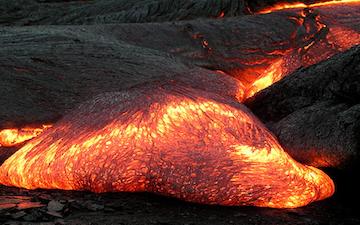 When a volcano began erupting on the island of Hawaii in May of 2018, satellites kept a close eye on it. Just three days after the lava flow hit the ocean, for example, they saw that the water was turning green. And it stayed green until after the eruption ended a few months later.

The Kilauea volcano belched millions of cubic feet of rock. The flow destroyed about 700 houses and covered more than 10 square miles on the island’s eastern tip.

As the lava reached the Pacific Ocean, though, it began a period of creation. It added about a square mile to the island’s coastline. And it fed a massive “bloom” of microscopic organisms known as phytoplankton.

Researchers mounted an expedition into the waters near the lava flow to see what was going on. They measured high concentrations of several nutrients in the water -- especially nitrates, which are the major ingredient in fertilizers. These compounds aren’t found in the lava, though. Instead, they probably “bubbled” toward the surface as lava heated the water at depths of a thousand feet or more.

The sudden glut of nutrients caused a massive population explosion. The phytoplankton bloom eventually covered an area that reached a hundred miles out to sea and was 20 miles wide. And the researchers found that waters affected by the lava contained two to three times as much phytoplankton as the adjoining waters.

When the lava stopped flowing, though, the bloom vanished -- and the green in the water faded away.