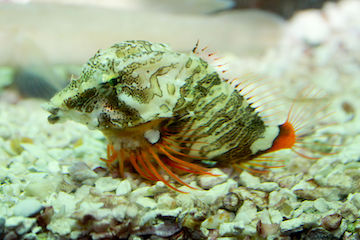 The grunt sculpin doesn’t do much of anything the conventional way. The little fish usually walks instead of swims. It frequently lives in “homes” that were abandoned by other creatures. And when it comes to courting and raising a family, the female pursues the male, who does most of the egg-sitting.

Grunt sculpin get their name from a “grunt” they make when they’re pulled out of the water. They live along the Pacific coasts of Japan and the United States. They’re found in tidepools and just offshore, usually in shallow waters. They top out at about three inches long.

The sculpin’s head makes up about half of its body, which is covered with spiky plates instead of scales. Its bottom fins are shaped a bit like fingers. It uses those fins to “crawl” across the rocky or sandy sea floor.

When it’s time to mate, the female grunt sculpin chases a male until she corners him in a rocky crevice or in one of the creature’s favorite habitats, the abandoned shell of a giant barnacle. She then lays her eggs, and guards the male until he’s fertilized them.

After that, she leaves the nesting spot, letting the male keep the eggs clean and safe. Mama sometimes returns to the nest for short periods, though.

When the eggs are ready to hatch, the parent on duty gathers them in its mouth and takes them outside the nest. It then spits out the eggs, which breaks their shells and releases the little ones -- one more way in which the grunt sculpin is a little different from most other fish.