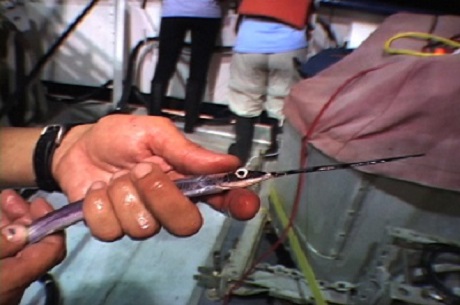 A fish known as the halfbeak looks like it’s about ready to do some knitting, have a sword fight, or give somebody an injection. That’s because its lower jaw resembles a needle -- it’s long, thin, and pointed. But the halfbeak doesn’t appear to use it to “jab” anything at all.

There are about 70 species of halfbeaks. They’re found in the open ocean or in coastal waters around the world. Most are no more than a few inches long, with sleek silvery bodies. They live near the surface, so they’re darker on top than the bottom -- a bit of camouflage from both predators and prey.

Their most prominent feature is the lower jaw. It can account for about a quarter of the halfbeak’s length. And it usually has a red or orange tip.

Halfbeaks don’t seem to use the jaw as a weapon, though. And the jaw is fixed in position -- it doesn’t swing open like the short upper jaw does. Studies have suggested that it’s lined with sensors to help the fish detect prey.

Not surprisingly, halfbeaks are related to needlefish, which have sharp lower and upper jaws. And they’re also related to flying fish.

In fact, some species of halfbeaks can fly on their own. They don’t travel as far as flying fish, and they’re not as graceful. But they can extend the fins on the sides of their bodies to act like wings. And they twist their back ends so the fins on the top and bottom of the body are parallel to the surface. That provides stability, like the tail of an airplane -- helping the halfbeak glide above the water.