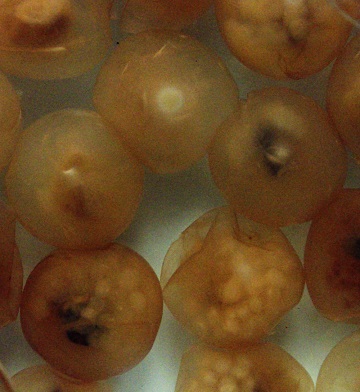 People often make fun of the phrase “jumbo shrimp,” as if anything called a shrimp could also be jumbo. What’s really funny, though, is the name of a relative of the shrimp: the giant ostracod. This odd critter is no bigger than a meatball. It’s “giant” only in comparison to other ostracods, which can be as tiny as a poppy seed.

The giant ostracod looks a little bit like a meatball, too. But it’s a shrimp-like creature that lives inside a thin translucent shell that’s shaped like a ball. Two long antennas extend through the slit in the shell, helping the ostracod “feel” its way along.

Giant ostracods spend their whole lives in the open ocean, typically at depths of 2,000 to 7500 feet. They get around by opening the shell and deploying a set of long, feather-like antennas as paddles. The ostracod is a smooth swimmer, and can glide along at more than 15 times its body length every second.

The giant ostracod’s most interesting features are its heart and its eyes. The heart is unusually large for a crustacean, and it beats about a hundred times per minute. That may indicate that the ostracod is an active hunter, chasing after tiny fish and other tasty morsels.

The heart may also be needed to support the ostracod’s big, round eyes. They’re unlike the eyes of most creatures, because they consist of curved mirrors that reflect light to a central location, like the mirror of a telescope. That helps the giant ostracod find potential prey that produce their own light in the dark ocean depths.