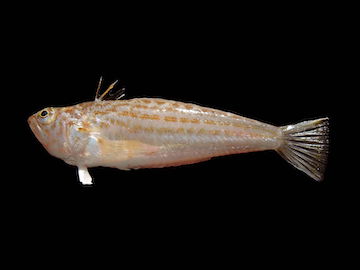 The pain of getting stung by a lesser weever can last from hours to days. Photo Credit: Hans Hillewaert/ Creative Commons Attribution-Share Alike 4.0 International

The lesser weever typically is no more than about five or six inches long. Even so, you don’t want to mess with it. It can give you a painful sting that can smart for hours.

You’ll come across this little guy mainly if you visit the North Sea or the Mediterranean Sea. It lives in shallow coastal waters with sand- or gravel-covered bottoms.

In fact, the lesser weever spends most of its time buried in the sand or gravel, with only its eyes and part of the black fin on its back sticking out. It waits for a small fish or shrimp to wander by, then lunges after it. It can generate a burst of speed over a couple of feet. If it misses its prey, though, it quickly drops back to the bottom, where it once again covers up.

Perhaps because it spends so much time just waiting, and heads to deeper waters to chill out during winter, it lives much longer than most other fish of its size -- up to 15 years.

Because the lesser weever is generally close to shore, it often gets stepped on by waders. Its exposed fin has a long spike at the front, like a needle. It uses that spike to inject a neurotoxin into the offender. That produces a sharp pain that can persist for a couple of hours, and a duller ache that can last for a day or longer.

A laboratory study a few years ago found that the venom can stop the development of cancer cells. Although researchers haven’t yet taken advantage of that, it shows that there’s still a lot to learn from the oceans -- even from little creatures with nasty stings.