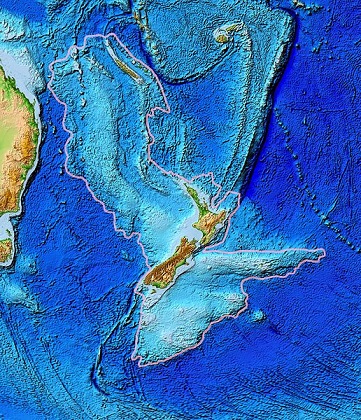 New Zealand may be the equivalent of the Rocky Mountains: the highest part of a continent. Unlike North America, though, the rest of New Zealand’s continent is hidden -- at the bottom of the Pacific Ocean.

The continent of Zealandia was first mentioned in 1995. It didn’t gain wide acceptance, though, until a couple of decades later, when a paper brought together the evidence of its existence.

Researchers also mapped the ocean contours in that part of the Pacific. They found a large feature that’s thousands of feet higher than the surrounding sea floor. It covers almost two million square miles -- about two-thirds the size of the continent that forms Australia.

Finally, satellites mapped the gravitational field of that part of the world. They found that the formation around New Zealand is much thicker and less dense than the rock that makes up ocean crust. In other words, it’s a piece of continental crust -- like North America and the other continents.

Zealandia formed about 85 million years ago, when a single slab of land broke apart to make the modern-day continents. It’s been pulled, twisted, and squeezed since then. Most of it has sunk beneath the waves, leaving only New Zealand and a few other islands in view -- the Rocky Mountains of a submerged continent.