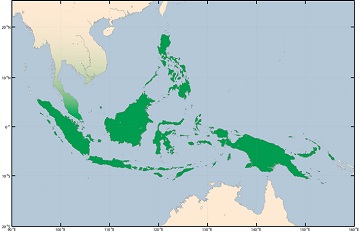 The Maritime Continent sits between the Indian and Pacific oceans and includes thousands of islands. Credit: Australian Government Bureau of Meteorology

The phrase “Maritime Continent” sounds like an oxymoron. One word refers to the oceans, the other to land. Yet it’s a name that oceanographers and climate scientists have applied to a region around Southeast Asia. That’s because there’s a strong interaction between land and sea there -- an interaction that affects the climate of the entire planet.

The Maritime Continent sits between the Indian and Pacific oceans. It includes Indonesia, the Philippines, and Papua New Guinea -- thousands of islands and many seas. It’s in the tropical warm pool -- the warmest large span of ocean in the world, with an average temperature of about 82 degrees Fahrenheit. A lot of water evaporates from the warm ocean surface and streams into the atmosphere. Carried by tropical breezes, it wafts over the islands. During the day, the land heats up, which creates rising air currents. They carry the water vapor to high altitudes, building thunderstorms.

That weather doesn’t just impact the Maritime Continent, though. It drives air currents that circle the planet, influencing the climate in much of the world.

The warm pool also helps drive El Niño and La Niña, which change weather patterns in the United States and elsewhere. And it controls the monsoon season in Australia. The warm pool has been expanding in recent years -- the result of our warming climate. Over the last three years, an international project has been studying what that means for the Maritime Continent -- and the rest of world, too.