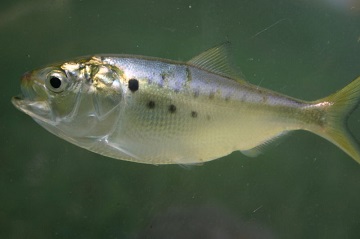 Atlantic menhaden stinks. Because of that, its oily flesh isn’t exactly a sought-after treat. Over the decades, though, it’s been a common sight on American dinner tables -- in margarine, salad dressing, cookies, and other products. It’s also been used to feed pets, other fish, and even plants. In fact, menhaden is one of the most economically important fish in American waters.

Several species of menhaden, which is a type of herring, are found along American coastlines. The most common is the Atlantic menhaden. It’s found from Nova Scotia to Florida. It’s most common in Chesapeake Bay and surrounding waters, where many juveniles spend their first year or so. A typical adult is up to about 15 inches long, and weighs a pound or so. They migrate southward during winter, in schools of up to a million.

American fleets have been hauling in massive amounts of menhaden since the early 1800s. The catch peaked after World War II, with up to 700,000 tons per year.

Most of the catch is processed into fish meal, fish oil, or fertilizer, or for use in cosmetics and other products. And some is used as bait to catch other fish.

In fact, menhaden is also a favorite meal of bluefish and humpback whales, plus ospreys and other shorebirds. So this unappetizing fish is important not just to the economy of the Atlantic coast, but to its ecology as well.