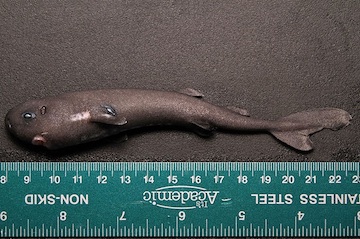 The pocket shark is a recently classified shark that only grows up to six inches long. Photo Credit: NOAA

Biologists have been sampling life in the Gulf of Mexico for decades. Yet they're a long way from getting acquainted with everything that lives there.

Consider a tiny shark that was discovered there a decade ago. When researchers pulled it from the water, they didn't recognize it. It took them until 2019 to classify it. It turns out the shark is a member of a species never seen before.

Scientists grabbed the shark during a research cruise in the central Gulf in 2010. They were studying the feeding habits of sperm whales. As part of that project, they trawled for fish and other organisms in the water.

They preserved the unusual shark, which is only about six inches long, for a few years. Then they studied it through photographs, CT scans, and X-rays at a facility in Europe that produces exceptionally strong beams of energy.

They decided that it's a type of pocket shark. Only one other pocket shark had ever been captured -- off the coast of Peru, in 1979. They're named for a pocket-like gland near their front fins. The gland appears to contain a luminescent fluid. It supplies the fluid to light-emitting patches on the shark's body.

The Gulf of Mexico fish was a different species, though. It has fewer vertebrae and different teeth. And it has light-emitting patches across its belly and other parts of its body. The ones on the belly may make it tough to spot from below. And the others may attract prey. But there's still a lot to learn about this newfound shark from the Gulf of Mexico.