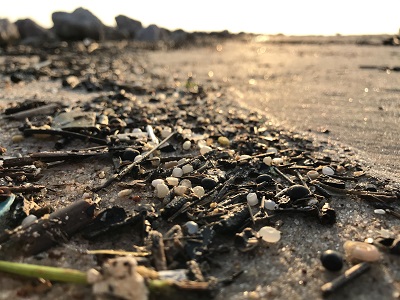 A “nurdle” sounds like a character from a children’s TV show. And if you look at one, it seems just about as harmless. But these tiny plastic beads can cause big problems for marine life.

“Nurdle” is a nickname for plastic pellets that are no more than five millimeters across -- the thickness of a stack of three U.S. quarters. The pellets are the raw materials for making larger plastic items, from toothbrushes to cellphone cases to car parts.

Nurdles are churned out by the billions. And they can enter the environment in many ways. They can be spilled during production, while they’re being loaded on trucks or trains, or during transit. They wash into rivers and streams, then into the ocean, where they can be eaten by marine creatures. Along the way, they can soak up pesticides and other nasty chemicals.

Several groups around the world have started efforts to find nurdles on the beaches. That helps scientists track down where the beads come from.

One of the most recent is the Nurdle Patrol, at the University of Texas Marine Science Institute. It began in September of 2018 after a spill on the Texas coast. Researcher Jace Tunnell started a Facebook group asking for volunteers to count nurdles on the beaches. More than a thousand people responded, and not just in Texas.

The project expanded in late 2019. So far, its volunteers have logged counts along all three American coastlines, the Great Lakes, and as far afield as Colombia. You can find out how to join the effort at nurdlepatrol.org.