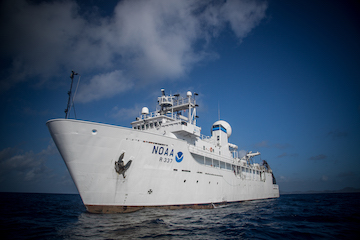 The Okeanos Explorer will be traveling from South Carolina to Bermuda to the Azores. Photo Credit: Art Howard/ NOAA OER

A research vessel will be making some nice stops this year -- from South Carolina to Bermuda to the Azores. Between those ports of call, it’ll explore regions of the Atlantic Ocean that are largely uncharted. It’ll map the ocean floor, take a look at coral reefs, and study the water. And it’ll broadcast all of its work in real-time, allowing scientists around the world -- and all the rest of us, too -- to watch over its shoulder.

Okeanos Explorer is the federal government’s leading ship for scientific exploration. The 224-foot vessel is operated by NOAA -- the National Oceanographic and Atmospheric Administration. The former Navy vessel is based in Rhode Island, and it’s been exploring the oceans since 2010.

Most research vessels explore a single region or problem at a time -- they try to answer specific questions about the oceans. Okeanos Explorer, on the other hand, explores broad areas, trying to gather as much information as possible for scientists to study.

It has several sonar systems to map the ocean floor, plus instruments for studying the water. And it carries two small robotic submarines that can dive to about 20,000 feet. They take a close look at life on the ocean floor, and occasionally grab samples to return to the surface.

Most of the scientists involved with a mission stay ashore. They keep in touch through a high-speed satellite link. And all of the ship’s observations are stored for later review by just about anyone -- opening the oceans to the entire world.