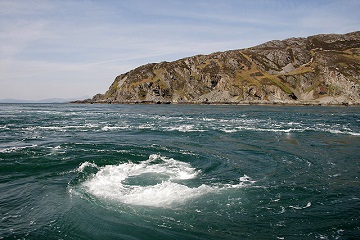 About twice a day, more than half a trillion gallons of water flow into and out of Passamaquoddy Bay, on the coasts of Maine and New Brunswick. The massive flow creates eddies, currents, and troughs -- including the largest whirlpool in North America.

The Old Sow has been measured at up to 250 feet wide, with an estimated depth of up to 12 feet. It’s not always a funnel-shaped hole in the surface, though. It often consists of several smaller funnels, along with walls of water, spouts, and other features.

The turbulence is created by the tides and by the contours of Passamaquoddy Bay. As the tide flows in from the Bay of Fundy, it passes between islands. That channels it into a narrow but powerful stream -- like water from a hose that’s partially covered by your finger.

As the water muscles its way through, it makes a hard right turn. It then passes over a trench, a hill, then another trench, all while moving into a narrower channel, which raises the water level. That churns things up, creating a choppy surface.

Over the last century, several efforts have been made to harness the power of those immense tides. The largest began during the Great Depression. An engineer planned a series of dams between islands that would generate three billion kilowatt hours of electricity a year. With support from President Franklin Roosevelt, construction actually got started. Congress cut off the funding, though, so it was abandoned -- leaving The Old Sow to churn up Passamaquoddy Bay.