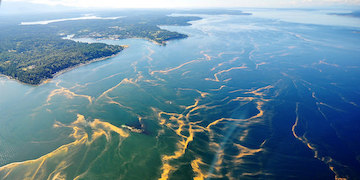 An image of Puget Sound, a network of basins and channels that was created by glaciers at the end of the last ice age. Photo Credit: Washington RCO

When the glaciers retreated from around present-day Seattle at the end of the last ice age, they left some big holes in the ground. Today, those holes form Puget Sound -- a network of basins and channels in northwestern Washington. The sound is home to an amazing variety of marine life. But the numbers have been dwindling.

Puget Sound is the second-largest estuary in the U.S., after Chesapeake Bay in Maryland. It extends about a hundred miles south of the Strait of Juan de Fuca, an inlet from the Pacific Ocean. It consists of four basins. Three of them form a chain, separated by shallow ledges known as sills. Water in the basins averages about 450 feet deep, with the deepest spot bottoming out at about 900 feet.

The sound is well known for its shellfish, especially Dungeness crabs and a type of clam known as geoducks. But it’s also home to salmon, cod, herring, and many other fish, as well as whales, sea lions, seals, and hundreds of species of seabirds.

In recent decades, though, the populations of many of these creatures have dropped. In part, that’s because of changes in the water quality -- runoff has poured chemicals into the sound. An increase in the human population around the sound has resulted in a loss of habitat. And climate change may be taking a toll as well.

Government agencies have established more than a hundred marine protected areas within the sound. Those areas restrict fishing and other human activities -- attempts to keep Puget Sound vibrant in the decades ahead.