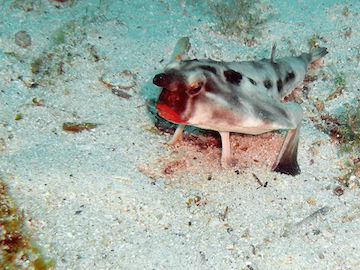 If a modern-day Hollywood creature designer worked with a 1940s make-up artist, they might come up with something that’s shaped a little like a bat, walks on the ocean floor, and has gaudy red lips. In other words, they’d make a red-lipped batfish -- an odd critter that lives on reefs around the Galapagos Islands, which are off the Pacific coast of South America.

The red-lipped batfish isn’t very big -- up to about eight inches long. It has a flat body that’s wide at the front and tapered at the back. And it’s not much of a swimmer. Instead, it “walks” along the bottom on some of its fins. When it does so, it looks a bit like a bat walking on its wings.

Like some other species of fish, the red-lipped batfish has a little bauble on its back that acts as a lure, attracting prey -- shrimp and small fish. And a long “snout” juts forward from the top of its head.

The fish’s body color is pretty bland -- light brown and gray on top, white on the bottom. Its face is dark red. But its most eye-catching feature is its lips. As the name suggests, they’re bright red -- like those of a Hollywood starlet from an earlier era. And they’re shaped like human lips, too.

Biologists aren’t sure exactly why the lips are so bright red -- especially since the color isn’t that obvious on the bottom of the ocean, where the light can be dim. There are suggestions, though, that the color might play a role in courting and mating rituals -- helping individual red-lipped batfish stand out from the crowd.