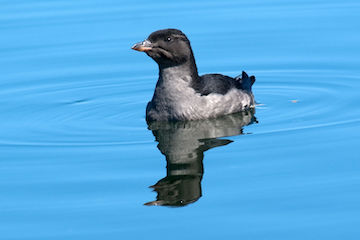 The Rhinobird can grow to over a foot in length with a wingspan of two feet. Photo Credit: Dow Lambert/ Creative Commons Attribution 2.0 Generic

The rhinoceros auklet has a strong work ethic. The bird heads out to sea before dawn, spends the day hunting, and returns to its nest well after dark. Since predators can’t see the birds coming and going as well when it’s dark, that behavior may help the auklet protect its nest.

The rhinoceros auklet is found along the Pacific coasts of North America and northern Asia. In North America, most of them breed in cooler northern climates, then winter over in California.

Rhinoceros auklets grow to a foot or more in length, with a wingspan of almost two feet. They have a dark gray body with a white belly and an orange bill. And they get their name from a small “horn” atop the bill. The horn grows during spring and drops off at the end of summer.

The birds live mainly on islands, where they dig burrows that can be more than 10 feet deep. The burrows usually are found on cliff faces or on steep slopes. The high perches may help the auklets take off. Once airborne, they race along just above the waves in search of fish and other prey.

Like penguins, the birds are especially good swimmers. Their bodies are adapted for life under water, where they use their wings to swim. They typically dive to depths of 30 feet, although they can go down to 200 feet or more. And they can stay under for a couple of minutes. Their hunting grounds are usually close to shore, in areas where nutrient-rich water rises to the surface. They patrol these waters during the day before heading home to a nice, dark burrow.