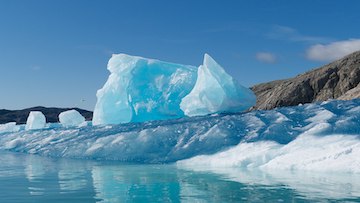 Some of the most amazing colors on Earth are seen in icebergs and their parent bodies, glaciers. The intense shades of blue and blue-green make them look like icy confections -- like sno-cones flavored with blueberry or mint syrup.

These masses of ice are colored blue for the same reason as the water in the oceans. Water molecules are just the right size to absorb the longer, redder wavelengths of light. But they allow the shorter, bluer wavelengths to pass through, or to scatter like blue jellybeans dropped on a hardwood floor.

Ocean water doesn’t always look blue, though. Particles of dirt, microscopic organisms, or other impurities can color it red, brown, or other colors.

Most ice looks white or cloudy. A pile of snow on your driveway, for example, is generally bright white. That’s because the ice crystals contain a lot of air bubbles, which reflect all wavelengths of light -- making them look white.

In a glacier or iceberg, though, things are different. As snow piles atop a glacier, the pressure gets greater and greater. That squeezes out almost all of the air bubbles. It also causes the ice crystals to grow bigger than the crystals in snow, or in the ice you plop in your beverages. So the crystals are more efficient at absorbing red light and letting the blue shine through.

And since icebergs and glaciers are big, sunlight shines through a lot of ice before it reaches the human eye. That makes the ice shine in various shades of blue -- beautiful concoctions of frozen water.