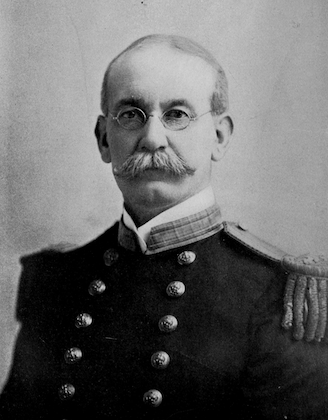 In the history of the United States, Dwight Sigsbee is recorded as the captain of the U.S.S. Maine when the ship was sunk in Havana Harbor in 1898. The sinking triggered the Spanish-American War.

In the history of oceanography, though, Sigsbee is recorded across the bottom of the Gulf of Mexico. Because he led the first expedition to chart the Gulf floor, in the 1870s, he’s the namesake of several features. They’re all part of the deepest part of the Gulf -- a 300-mile-wide patch known as the Sigsbee Basin or Sigsbee Deep.

The basin is centered about halfway between the coast of Texas and the Yucatan Peninsula. It sits atop vast beds of salt. It may have formed when those beds subsided several hundred million years ago.

The basin is surrounded by sharp cliffs on three sides. The cliff on the northwestern side is the Sigsbee Escarpment. It’s up to 4,000 feet tall. The center of the basin consists of the Sigsbee Abyssal Plain. It’s one of the flattest features on Earth. Its smooth surface is broken only by a few salt domes, the Sigsbee Knolls, which are several hundred feet high.

Sigsbee Basin is relatively unexplored. In fact, there’s no consensus about its maximum depth. Different sources say it’s either about 12,300 feet or about 14,400 feet.

Recent work has shown that the basin is home to the most persistent current in the deep Gulf of Mexico. The rotating current moves at about a tenth of a mile per hour, and it has a familiar name: the Sigsbee Abyssal Gyre.