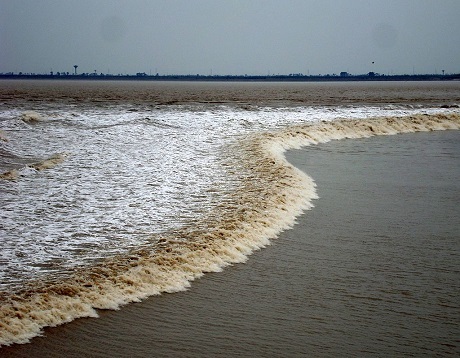 Surfers who want to spend a long time riding a single wave might not want to spend their time in Hawaii, Australia, or Portugal. Instead, they might want to surf up a river in China, where a single wave can last for more than an hour -- a wave known locally as the silver dragon.

The wave is a tidal bore. Such waves form on rivers that flow into wide, shallow bays that have a large swing in the height of the tides. At the highest tides, the bay acts like a funnel, pushing water into the river. As the river narrows, the tide gets higher, forming a taller wave. The wave is especially high around new Moon or full Moon. The gravity of the Moon and Sun pull along the same line, increasing the height of the tide.

The silver dragon is the tallest of all tidal bores. It flows from Hangzhou Bay, on China’s eastern coast. The bay is about 60 miles wide as it empties into the sea, but only 13 miles wide at the mouth of the Qiantang River -- a perfect shape for a tidal bore. As the bore travels up the river, it can reach a height of 30 feet and a top speed of 25 miles per hour. It’s visible from miles away.

The waves have been drawing visitors for thousands of years. In fact, a chart from the year 1056 predicted the tide’s appearances -- perhaps to make it easier for tourists to time their visits.

Today, the region hosts a festival each fall to celebrate the waves. Top surfers have ridden the wave for more than an hour -- getting the best of the silver dragon.