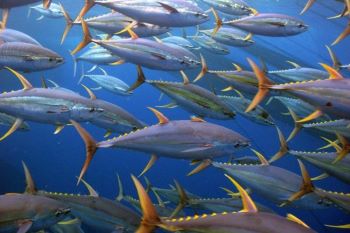 Bigger isn’t always better. A recent study, for example, suggests that big fish may have a tougher time adapting to the warming oceans. They might move to more comfortable waters more slowly than smaller fish, leaving them with less to eat and reducing their numbers.

Many species are already leaving their home ranges. They’re moving to cooler waters, where they’re more likely to find food. As the oceans continue to heat up, that trend should continue.

Many studies have looked at how individual species of fish are moving around, and might move in the future. But this was the first study to look at many species and how their interactions with each other might affect their migrations to new waters.

The study found that small prey species are likely to change home addresses more quickly. That would leave big predator fish with less food and more competition, reducing their numbers. The big fish will move, too, but more gradually. They’ll spread out more, leaving them with even less to eat. And they’ll be more vulnerable to overfishing, which will thin out the population even more.

So, while the big guys are likely to still be around a couple of hundred years from now, they could be a lot less common.