Watch a jellyfish floating in the sea, and you might assume the animal is simply drifting along haphazardly. But some species of box jellyfish can guide themselves through complex habitats. 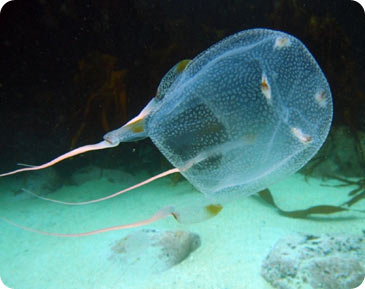 The box jellyfish is unique from other jellies in that it controls the direction in which it swims, like a fish. It can also make 180-degree turns and dodge underwater objects in its path.

The secret to the box jellies’ agility may lie with its sophisticated visual system. On each of its body’s four sides, the box jellyfish has a sensory structure called a rhopalium, which contains six eyes. Some of the eyes are simple in design, while two are more complex — complete with lenses, similar to those found in the advanced eyes of fishes, octopuses and squids. The box jelly’s complex eyes actually allow it to perceive objects in its surroundings, an ability other jellyfish cannot match.

Box jellyfish live in areas where most other jellies don’t venture - close to shore, where obstacles such as reefs, rocks and tree roots can pose hazards to a soft-bodied animal. One Caribbean species of box jelly, for example, hunts for fish and crustaceans in mangrove lagoons, where tree roots form a tangle of obstacles.

A closer look at the eye revealed something curious: the eye’s proportions make it under-focused, meaning it produces a less than perfectly sharp image. Rather than being a flaw, scientists think this under-focusing might aid the jellyfish by letting it see the large objects it needs to dodge, while leaving blurry the tiny particles in the water - which it doesn’t need to avoid.