With shells covered in algae and barnacles, decorator crabs are experts at blending in with their environments. But for one species of crab, it’s not just camouflage that keeps the hungry fish away. 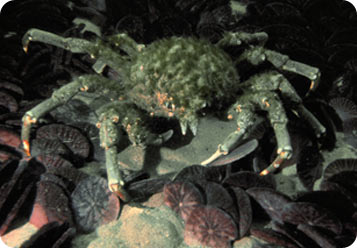 Decorator crabs often place algae and other items on their shells as camouflage. Credit: National Oceanic and Atmospheric Administration

Found in shallow water and seagrass habitats, decorator crabs are part of the spider crab family. A decorator crab’s shell is covered with specialized hook-shaped bristles, called setae. Crabs use the setae to attach materials from the environment, such as algae or tiny non-moving animals, to their backs and legs. This “decoration” camouflages the crab from predators.

One species of decorator crab, however, uses decoration for more than just camouflage. Researchers in North
Carolina found that longnose spider crabs adorn their shells with a species of brown algae that has its own chemical defense: a substance that deters fish from grazing on it. When crabs used this algae to decorate their shells, researchers found, they were less likely to be gobbled up by fish.

To find out whether crabs were seeking out this seaweed for its unappetizing properties, researchers coated
different species of algae with an extract from the deterrent-producing species. Sure enough, crabs chose
pieces of algae that had been coated with the extract over non-coated pieces when decorating their shells. The same chemical that deterred fish from eating the algae, the researchers concluded, was the one crabs sought out when choosing algae to decorate with.

Scientists have yet to discover whether other decorator crabs use this kind of chemical camouflage, but for this species, there’s more to decoration than meets the eye.