Going with the Flow

Wind and gravity aren’t the only forces that move the ocean’s water — there’s also a conveyor belt at work. 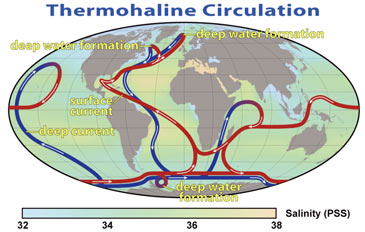 This map shows the pattern of thermohaline circulation. Credit: NASA

The densest water in the ocean is formed at high latitudes, in the Arctic and Antarctic regions. In the North Atlantic, for example, cold Arctic air cools the salty surface water until it becomes dense enough to sink.

This deep water slowly flows southward as the first leg of the conveyor belt. It eventually gets swept up with other deep water moving eastward around the Antarctic continent. Here, strong winds on the sea surface gradually mix the deep frigid water with warmer layers above it. This mixing continues as the water flows into the Indian and Pacific oceans, where some of it finally returns to the surface — up to 1,000 years later! Surface currents drive the conveyor belt from here on, sweeping the now-warm water into the southern Atlantic, then back toward Greenland to complete the circuit.

The ocean conveyor moves huge amounts of heat around the globe, making it a key regulator of Earth’s climate. Scientists have linked some major climate shifts in Earth’s history to conditions that prevented water from getting cold enough or salty enough to sink, bringing the conveyor to a halt. They’re also investigating whether mankind’s impact on the oceans could affect the conveyor — and thus, the world climate — in the future.