Oil: the Breakfast of Champions

The Deepwater Horizon oil spill that began in spring 2010 was one of the largest ecological disasters of recent history. The big question has been — how do we clean up all that oil? Maybe we don’t have to do it all: man’s disaster has been bacteria’s feast, and the amount of oil these microscopic creatures have chowed down is colossal.

In the five months following the spill, naturally occurring bacteria digested 200,000 tons of oil and gas from the Gulf of Mexico. That’s equivalent to the weight of 415 fully-loaded 747 airplanes carrying maximum loads. 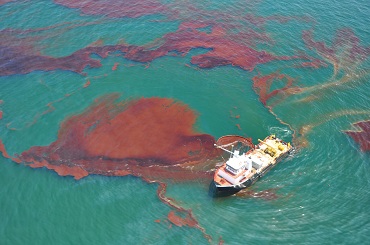 A vessel skims oil spilled after the Deepwater Horizon spill in the Gulf of Mexico. Credit: National Oceanic and Atmospheric Administration

All different kinds of bacteria came to the party. Crude oil is comprised of different hydrocarbons, chains of carbon molecules with attached hydrogen. Over a dozen different bacteria groups have evolved to feed on specific hydrocarbons. Many gobble up hydrocarbons on the surface or at the shoreline while others, remarkably, withstand the icy temperatures of the deep.

University of Texas Marine Science Institute researcher Zhanfei Lui found the group Vibrio was responsible for over half the oil-eating bacteria in the oil being washed onto the salt marshes. In fact, the amount of certain toxic hydrocarbons in the oil decreased more than 95% as bacteria decomposed the oil drifting toward the marshes.

These bacteria normally feed on oil that naturally leaks from the sea floor, but following a spill, their populations explode if there are enough nutrients, oxygen and nitrogen for them. They use enzymes and oxygen in the sea water to break down the hydrocarbons and release carbon dioxide.

Scientists have tried to harness these creatures’ appetites for cleaning up spills with genetically engineered bacteria, but no one yet has come close to the efficiency of these naturally occurring tiny bacteria in the sea. Some of man’s greatest allies in the Deepwater Horizon oil spill cleanup have been tiny bacteria just having their
breakfast.