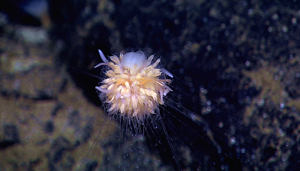 An ocean dandelion is made of of many individual animals cooperatiing. Credit: National Oceanic and Atmospheric Administration

Fields of dandelions are a familiar sight each spring, but another kind of dandelion is so rare that scientists are just beginning to learn more about it – the ocean dandelion.

Many animals live in colonies, such as bees and ants, but the individual organisms of those colonies can leave and return to the community. Not so for the individual animals that make up siphonophores: each animal thrives only as part of the whole and usually cannot survive long on its own.

Just as individual cells become specialized within a single animal’s body, each zooid in a siphonophore becomes specialized to perform a particular function for the colony. Collectively, the animals that form an ocean dandelion act like a single organism, sharing tissues and even sharing a single stomach that digests food and provides nutrients for all the zooids.

Corals and Portuguese man o’ war are more familiar types of siophonophores, but the ocean dandelion is still a bit of a mystery. Scientists do not know much about its diet, reproductive habits or other life functions, but one thing is clear: the beauty of this sea “flower” arises from the cooperation of hundreds of different creatures.