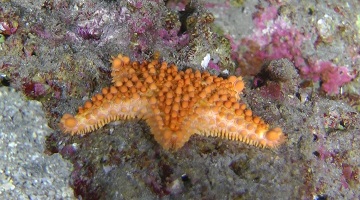 Uokeaster ahi is one of five species of sea stars discovered in 2021. Credit: Ariadna Mecho © 2021

One of the new sea stars is the brilliant orange Uokeaster ahi, found in the waters of Rapa Nui, the native name for Easter Island. Ahi, referring to the sea star’s color, means “fire” in the language of Rapa Nui. The new echinoderm’s genus is also related to the culture of the island: Uokeaster is a combination of Easter and Uoke, the mythological sea god who sunk the island of Rapa Nui so that only its tallest mountains poked out of the water. This new sea star lives in the reefs just under the surface of the “original” Rapa Nui land.

In the nearby waters of New Caledonia, the researcher also discovered Ophidiaster colossus, a member of a group of very large sea stars, and Astroglypha pyramidata, only the second sea star of the genus Astroglypha and the first from the Pacific Ocean…rounding out a collection that makes 2021 a 5-star year.