A One of a Kind Octopus…For Now 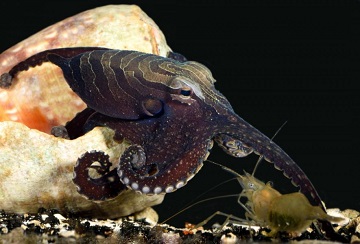 The larger Pacific striped octopus is unique in more ways than one. Credit: Roy Caldwell/UC Berkeley

Most octopus species hunt by probing holes or lunging at prey with all eight arms. But the larger Pacific striped octopus is not like most octopuses. This large species is more subtle—and sly. When it spots prey, the octopus shrinks itself and sneaks up to its mark. Then the cephalopod simply reaches out and… well actually, it gently taps its prey. The prey is so startled that it jumps into the octopus’s waiting arms, or the octopus uses the moment to grab dinner.

These striped beauties aren’t afraid of romantic entanglements either. Unlike the brief, arm’s-length transfer of sperm most octopus species use during mating, a male and female Pacific striped octopus spend time together, sometimes sharing meals beak-to-beak and staying attached to each other for several days.

When a Panamanian biologist first observed these behaviors in the 1970s, other scientists rejected them as too bizarre to be true, until recently, when others saw these behaviors for themselves. But it’s possible the Pacific striped octopus isn’t all that unusual. So few octopus species have been closely studied that biologists may yet discover even stranger lifestyles among others.