To Serve a Higher Porpoise 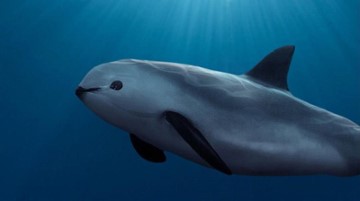 Many people have heard the cry “Save the whales,” but these massive creatures aren’t the only marine mammals at risk of disappearing. In fact, the smallest of the whales, the vaquita porpoise, is on the verge of extinction: just 10 individuals are estimated to remain in the world. Fortunately, those 10 appear healthy—as long as they can continue avoiding a specific fishing practice that continues illegally.

Vaquita porpoises measure just 4 to 5 feet long and live only in the Gulf of California, the strip of water between the Baja Peninsula and mainland Mexico. With only about 10 individuals left, biologists didn’t know what their chances of survival were, especially if inbreeding could endanger their survival. But a study published in May revealed good news. Scientists analyzed the genomes—the complete genetic code—of 20 vaquita porpoises that lived between 1985 and 2017. The findings suggest the species has an excellent chance not only of surviving, but of fully recovering as a population, at least in terms of their health and genetic diversity. Of the dozen marine mammal species whose genomes were analyzed, vaquita porpoises had the fewest possibly harmful mutations—encouraging news for future breeding.

Less optimistically, though, the only way vaquita porpoises can survive is if officials adequately enforce bans against gillnet fishing. Gillnets are long nets that resemble a tennis net, with holes large enough for fish’s heads to fit through, but not their bodies. When fish get their heads caught and try to back out, their gills get caught in the net. Poachers still use gillnets, even though Mexico has outlawed gillnet use. Vaquita easily become tangled in gillnets and drown. If gillnet bans are enforced, the vaquita porpoise has a far better chance of seeing the next decade.