The Marine Science Institute's monthly column, Science and the SeaTM, is an informative and entertaining article that explains many interesting features of the marine environment and the creatures that live there.  Science and the SeaTM articles appear monthly in one of Texas' most widely read fishing magazines, Texas Saltwater Fishing, the Port Aransas South Jetty newspaper, the Flour Bluff News, and the Island Moon newspaper. Our article archive is available also on our website.

Harvey, Irma, Jose, Maria… the 2017 hurricane season has been intense, and it’s not just humans trying to recover from the destruction. Like forest fires, hurricanes wreak havoc on habitats, but can also promote ecological renewal — if corals and other undersea creatures are not already under simultaneous stresses.

A Tiny but Fearsome Jellyfish

They’re tiny and they’re brainless, but the box jellyfish of Australia, known to science as Carukia barnesi, packs a deadly punch — and its victims aren’t random. Researchers already knew this extremely venomous predator was one of a half dozen jellyfish that cause Irukandji syndrome, named for an aboriginal tribe that lived in the area where most of the stings occur. Symptoms in humans include lower back pain, severe muscle cramps, vomiting, anxiety and occasional cardiac problems that can lead to death.

Living in near-total darkness requires some creative adaptations both to find food and avoid becoming food. For the red-colored strawberry squid, also called the cock-eyed squid, that creativity involves hundreds of tiny “strawberry seed” dots covering its body and a bizarrely mismatched pair of eyes. The “seeds” are actually tiny organs called photophores that emit light, or bioluminescence. The football-sized squid can use a camouflaging strategy of counter-illumination to avoid being seen from below.

The Nose Knows the Way

It’s said that sharks can smell a drop of blood in water a mile away. Depending on the shark species and its prey, that may be an exaggeration, but these predators undoubtedly have an incredible sense of smell. Some species can detect the scent of prey at one part per 10 billion — equivalent to a single drop in an Olympic size swimming pool. But sharks’ noses may do more than find food. For leopard sharks, at least, their sense of smell may also help them find their way.

Do Basking Sharks Bask in the Sun?

Although they frequently swim with their massive mouths wide open to feed, basking sharks don’t look like the Jaws-type predator most people think of when they imagine a shark. The biggest of these 4-ton fish are just a few feet shorter than a typical school bus. Their gaping mouths reveal their gills and filter-feeding structures, which together resemble the inside of a rib cage. Basking sharks are the second largest shark in the world and just like their bigger cousins, whale sharks, they are filter feeders. Their hundreds of tiny teeth are too small to do much damage.

The naming of a new genus and species of crab goes to show that the magic of J.K. Rowling can inspire more than just children, and sometimes an “outsider” has more to contribute than it rst appears. Just as Harry Potter seemed an unlikely boy to become a great wizard, Harry Conley was perhaps an unlikely explorer to discover several new and rare crabs. One of those crabs now has a name honoring both Conley and two important characters in Rowling’s stories. That name is Harryplex severus. 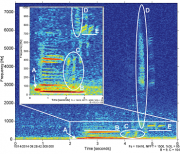 Putting the Ancients to the Test

Bowhead whales and Greenland sharks can live up to two centuries, and century-old Galapagos giant tortoises are just young adults. But none of these creatures can hold a candle to corals and sponges. Although both corals and sponges look somewhat like plants, they are two very different kinds of animals that can grow to be thousands of years old.