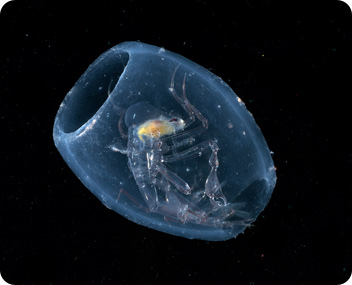 Imagine that you’re diving in an alien environment -- a few feet down in the middle of the ocean -- when you come face to face with a creature with giant eyes, big claws, and a mouth that rips apart its prey. You’ve just met phronima, a marine creature that may have inspired the design for the monster in the Alien movies. Fortunately, though, you’re not in any danger, because Phronima is no more than an inch long.

Phronima is a member of a group of animals called amphipods. They’re tiny crustaceans -- relatives of shrimp. Some amphipods creep along the ocean floor, feeding off the organic matter that falls to the bottom. Others float in the water column and eat microscopic plants or animals.

That includes phronima, which is found in waters all around the world. It has a transparent body, which helps it evade detection by predators in sunlit waters.

Although phronima doesn’t burst out of a victim’s chest, it can still be pretty monstrous to other marine creatures.

The female catches a small, barrel-shaped marine animal called a salp, then uses her mouth and claws to eat the insides and hollow out the ends. She then squeezes inside the gelatinous barrel she created and lays her eggs. As the young hatch, the mother holds on to the barrel and propels the entire brood through the water, bringing fresh food and water to her babies.

So like the monsters of “Alien,” phronima is a fierce predator who takes care of her young.