The largest creature ever to live on Earth wasn’t a mammoth, or even a dinosaur. It lives today, gliding through the depths of the oceans: the blue whale. It’s twice as long as a city bus and weighs as much as an airliner. And every day during peak feeding season, it can eat several tons of plankton - some of the smallest organisms on Earth. 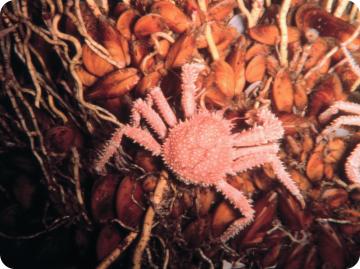 The blue whale and its diet illustrate the great diversity of life in the oceans.

It’s hard to find any region of the oceans that’s not teeming with life. It’s in the deepest parts of the oceans, beneath the Arctic ice cap, and around volcanic vents that squirt out scalding hot water.

So far, scientists have catalogued more than a quarter of a million species in the oceans. As they probe with better technology, they expect to find millions more.

These organisms have adapted to extreme conditions. Many deep-sea organisms, for example, produce their own light. Deep-water organisms also have adapted to near-freezing temperatures and pressures of up to nearly eight tons per square inch. That’s equivalent to one person trying to hold up 50 jumbo jets. And different regions of the oceans have different amounts of salt, oxygen, nutrients, and other ingredients. Yet no matter what the mixture, life survives - and often thrives.

This great diversity keeps the oceans full of creatures that swim, wriggle, or just float along in this vast underwater world.