The deepest canyon on Earth makes the Grand Canyon look like something a child dug in the sandbox. Yet only two men have ever seen it with their own eyes. The tallest mountain beats Mount Everest by three-quarters of a mile, yet most of it is blocked from view. And the longest mountain range wraps around the entire planet, yet most maps ignore it. 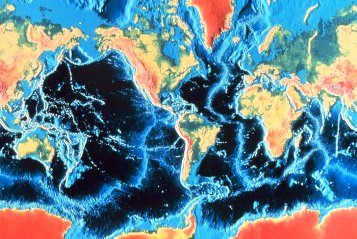 The mid-ocean ridge (colored blue) threads its way along the floors of all the oceans. Photo: National Oceanic and Atmospheric Administration / Department of Commerce.

All of these natural wonders are hidden beneath the oceans, where they’re difficult to study. In fact, because it’s so hard to chart the ocean floor, we have more detailed maps of Mars than of most of Earth.

That’s too bad, because we’re missing some spectacular sights. The deepest canyon, for example, is the Mariana Trench, in the western Pacific. It stretches almost six times longer than the Grand Canyon. And it contains the deepest spot on the planet: the Challenger Deep, which plunges almost seven miles beneath the surface.

The bulk of the tallest mountain is hidden beneath the waves of the Pacific. The mountain is Mauna Kea, one of the volcanoes that form the Hawaiian Islands. Measured from its base on the ocean floor, it’s almost 4,000 feet taller than Mount Everest.

And the longest mountain chain is the Mid-Ocean Ridge. It forms where plates of Earth’s crust spread apart, allowing molten rock to bubble up from below. The ridge threads its way along the floors of all the oceans, twisting for more than 30,000 miles across the bottom of the sea.