When the oil tanker Exxon Valdez ran aground in Alaska in 1989, it caused an ecological disaster. It spilled more than 250,000 barrels of crude oil, which washed up on more than a thousand miles of beaches. The spill killed countless fish, birds, and other animals, thinning out populations for years. 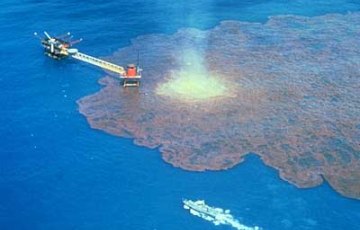 The IXTOC I exploratory well blew out on June 3, 1979 in the Bay of Campeche off Ciudad del Carmen, Mexico. By the time the well was brought under control in 1980, an estimated 140 million gallons of oil had spilled into the bay. Photo: National Oceanic and Atmospheric Administration / Department of Commerce

In the midst of the disaster, though, scientists tried an interesting way to clean up the beaches: In essence, they let Mother Nature do it. The techniques were successful enough that they’ve been applied not only to oil spills, but to other kinds of hazardous waste as well.

The technique is called bioremediation. It takes advantage of the fact that Nature provides organisms that’ll eat just about anything-including oil.

The oceans and coastlines are home to species of bacteria and other organisms that gobble up hydrocarbons. They break them down into fairly innocuous substances like water and carbon dioxide.

In the Exxon Valdez case, researchers added fertilizer to long stretches of beach. That helped the bacteria do a more efficient job of removing the oil. These efforts produced cleaner beaches -- and highlighted another tool in the arsenal for cleaning spins.

Bioremediation isn’t the only answer to oil spills. It’s still important to scoop up as much oil as possible and use other cleaning techniques. But Nature’s own scavengers may be just right for the final phase -mopping up the last of the oil on contaminated beaches.