Digging for clams on Cape Cod is an All-American summer pastime. But the clams remained safely buried last summer, because coastal waters from Massachusetts to Maine were contaminated by a red tide. 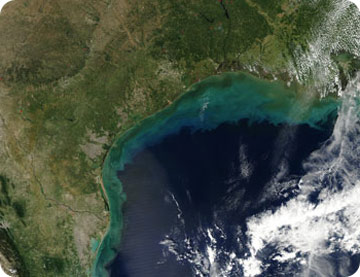 Brightly-colored waters in the Gulf of Mexico indicate the presence of sediment, detritus, and blooms of phytoplankton. Photo: MODIS Rapid Response Team, NASA/GSFC

A red tide occurs when common types of algae produce population explosions. There can be so many of these microscopic plants that they color the water red or brown. In many cases, though, they’re undetectable.

Many red tides are harmless. But others can kill fish and other animals in the water, and harm the creatures along the shore that eat them.

A red tide on the Texas coast in 1935 produced a massive fish kill, for example. Scientists didn’t know what was causing the fish to die. So a University of Texas biologist set up a lab in the small coastal town of Port Aransas to study the event. His work led to the creation of the University’s Marine Science Institute.

Last year’s red tide in New England began in the Gulf of Maine. Heavy rainfall along the coast had flushed a lot of freshwater and nutrients into the gulf, providing good conditions for a certain type of algae to bloom. Unusual wind patterns pushed the algae all the way to Cape Cod.

The algae produce a toxin that builds up in oysters, clams, and other shellfish. It doesn’t hurt the shellfish, but it can hurt the people who eat them. So the shellfish beds from Maine to Massachusetts were closed for months -- protecting clam-diggers and consumers from the hazardous effects of a red tide.